Over the years, several projects aimed at the automotive sector have been developed, involving resources greater than R$ 12 million directed to developing products and processes. The Unit can serve automakers, tractor manufacturers, trucks, and military vehicles, as well as the auto parts sector.

UFMG Powertrain is composed of 16 researchers, permanent UFMG and participating professors who coordinate undergraduate and graduate students, as well as engineers and technicians hired to develop RD&I projects.

The existing infrastructure in the Unit enables the:

The Unit competence is shown by the various projects it carried out in partnership with national and international companies and by the volume of the funds it raised. In the last four years alone, it hired 20 research projects and service contracts. As an example, some of the partner companies are: CNHi, IVECO, FCA, BMW, Bosch, Petrobras, Halliburton, Esab, Aperam, Arcelor, VALE, Boeing, CODEMGE, Aetra, Cemig, Coelba, and Cosern. 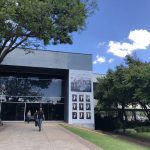